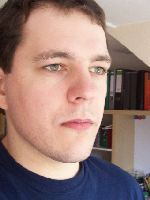 All materials on this web-site, if not stated differently, were created by Arkadiusz Wahlig.

I was born in the summer of year 1981 in Poland. I spent my happy childhood in a small town called Konotop where I lived with my family for 15 years of my life. I finished the elementary school there too. My education continued in a grammar school in Zielona Gora. At the age of 20 I moved to Germany where I started studying Computer Science after taking a couple of years off to learn the language.

I was interested in electronics pretty early. One of the wardrobes in my room was filled with taken apart radios, decks and amplifiers. My interest in computers started around year 1992 when I was 13 and I got my first computer, the Commodore 64. These machines were getting quite old at the time but it was still a popular hardware in such a young democratic country as Poland (Poland stopped being govern by communists in 1989).

The games got me bored pretty quick and I started looking closer at the machine. I discovered that with programming I can be even more inventive than I could be by soldering all the cables in my wardrobe. My initiation started with CBM BASIC, the language built in the little C64. Then I moved to the 6502 assembly for a short time. When C64 was not enough anymore, I moved to Commodore Amiga where I learned C and MC68K assembly. Shortly before I got my first PC, I knew almost everything about Amigas and their fantastic operating system. One of my last programs for the platform was the MultiSlownik.

Today I try to embrace all the new programming Technologies showing up in the computer world. Besides desktop programs, I programm mobiles, web applications and so on. I haven't stopped spending most of my free time with computers digging deeper and deeper into how they work and how to create better software for them.